The New Web Is Now

For a long time, Adobe Flash was the only technology that could provide rich, interactive experiences on a website. Now new technologies are becoming available that may usurp Flash’s dominance.

First, a little bit of history: During the early days of the web (the 90’s and early 2000’s), HTML and other web standards were pretty basic. Browser makers would create proprietary methods for any new features they added. The method to add sound to a webpage, for example, was completely different between Netscape Navigator and Microsoft Internet Explorer, the two dominant browsers at the time. To provide more interactivity in websites, Netscape created JavaScript, and Microsoft adopted a similar (but in some ways incompatible) version for Internet Explorer. As such, website creation was a very difficult task if you didn’t want to fracture your audience or exclude some of them. 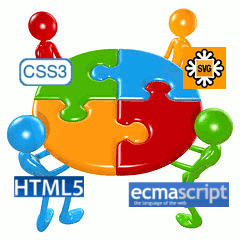 Then, Macromedia (now Adobe) created a technology called Flash. On the multimedia front, it was a boon. Website authors could now build an entire site and only worry about a single technology. Nowadays, Flash comes pre-installed with most browsers, resulting in a 98% market penetration rate.

Unfortunately, for a long time Flash was a closed and proprietary technology. Last year I wrote a post called “Flash Websites No Longer Second-Class Citizens“, which mentioned how search engines were going to be able to “see inside” previously-closed Flash files. Despite Adobe’s push to make it a ubiquitous, open standard, Flash still has problems that keep it from being a perfect solution.

After 2001, Internet Explorer was by far the most popular browser, responsible for around 90% of all browsing. This near-monopoly prompted a lawsuit and resulted in a technology stagnation for much of the decade. When the Firefox browser (then known as Phoenix) was released in the mid-2000s, it prompted a renewed advancement of web technologies.

Google has been credited with advancing the interactive side of the web. With their Gmail and Maps applications, Google pushed the boundaries of user interfaces for websites. Now you could interact with a webpage with the same responsiveness as an application installed on your machine. Since then, there has been an explosion of online applications, from Facebook to Twitter. JavaScript has since been merged into a formal standard (called ECMAScript), and there are many well-built frameworks available that make it a snap for developers to create highly interactive sites.

On the graphics side, a standard called CSS has allowed developers to stylize their websites for many years now. The latest version, CSS3, provides more advanced capabilities and effects. Another technology called SVG (scalable vector graphics) is also gaining ground. Just a few years ago, these effects would have to be implemented in Flash or through a series of time-intensive hacks. Even video, which has almost always been played using Flash, is included natively in the newest version of HTML.

Because of the widespread adoption of these technologies, the browser market is much more compatible nowadays. Almost all modern browsers (with the exception of Internet Explorer) have the same capabilities. Plus, JavaScript frameworks and libraries are available to fill the gaps.

What does this mean? The web is now a first-class citizen, no longer relegated behind printed publications or desktop programs. Now web developers can provide these rich experiences without sacrificing audience or search engine ranking. Developers don’t need to limit their creativity to fit within the constraints of the technology. Sites can be built using standard, open technologies, and they take less time to create.

It’s still not perfect. Many of these technologies are still in a nascent state, or require longer download or processing time to get them working for everyone. But they are gaining acceptance, meaning the potential of the medium is finally hitting its stride.