The Curious Case of the Silent MP3

Had a bit of a mystery recently. One of my MP3s (Radiohead’s “Optimistic”) suddenly stopped playing in my media player. What was strange was that it didn’t give any errors — in fact, the file played normally, but was completely silent for all 5 minutes and 16 seconds.

Confused, I tried opening it in another media player and encountered the same issue. I opened it in an audio editor and the waveform was flat! But here’s the kicker: the file had not been modified since 2001, and it played correctly on other computers! Plus, this was the only MP3 in my entire library that has the problem. So what is going on?

After verifying from a backup that the file had indeed not been changed, I experimented with more programs. Media tools — rippers, encoders, and players — are notoriously finicky, as the variable results below confirm.1

Interesting note: In the cases of media players, the (graphic) visualization plugins worked as expected during playback activity.

I then attempted to decode the MP3 into WAV format using LAME 3.94. The resulting WAV played successfully.

Now the question was: Is the file corrupt or otherwise specially crafted? This is certainly plausible, since I got it off the Internet in the days of Napster. The fact that the audio editors/converters can’t read the file indicates this is the problem as well.

Luckily, there are various tools available to check for MP3 consistency. I installed a bunch of them and ran them against the file.

The checkmp3 program didn’t seem to find any problems.

MP3val is “a small, high-speed, free software tool for checking MPEG audio files’ integrity. It can be useful for finding corrupted files (e.g. incompletely downloaded, truncated, containing garbage). MP3val is also able to fix most of the problems.”

mp3check (not to be confused with checkmp3) “checks MP3 files for consistency and prints several errors and warnings.”

So, according to mp3check, every frame in the file has “0” for the CRC sum.

Unlike the other tools, MP3 Diags is a GUI-based application. It allows end-users to “identify issues with their MP3 files, fix some of the issues and make other changes, like adding track information.” 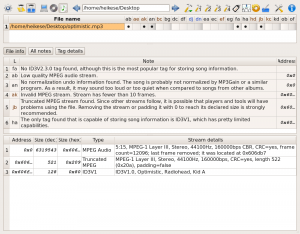 Here are the results in text form, prefaced with the 2-character “note labels”:

Points 4 [ak] and 5 [jb] are the only serious notes, but seem to mention only the truncated audio stream at the end — not any CRC errors with the main stream.

All of the diagnostic tools from the previous section also provide options to repair files. I ran these fixes (so that the reported errors disappeared) and replayed them to see which, if any, fixed the problem.

I don’t have a copy of the official MP3 file format specifications (since that requires paying for it2), so I don’t know what the official playback behavior should be (or even if it is defined). Apparently the question is a matter of opinion — the media players that failed obviously take the CRC checksums seriously, while others, such as Apple, took the approach of ignoring them.

Despite being only at version 0.1.7 at the time of this writing, mp3val seems to be the better of the two repair tools — it keeps the ID3 info, seems to be actively maintained, has a Windows version, and has graphic frontends available.

So that only leaves one puzzling question: Why did the MP3, which hadn’t changed, suddenly stop playing on software that also didn’t change?

1 I know many of these programs are old versions, but that’s because I don’t use them regularly. They just happened to be on my computer.

2 But check out MP3: The Definitive Guide by Scot Hacker / O’Reilly.

2 Responses to The Curious Case of the Silent MP3