Moving a Front-End Enterprise App into a Monorepo

There have been a lot of posts on the benefits of having all your organization’s code in a single repository, known as the monorepo. (See David R. MacIver’s post for a good summary.) Several popular projects, such as Babel and Plotly, follow this approach. After a lot of discussion, the front-end Banno team at Jack Henry decided to follow this approach for our web products.

The Banno enterprise platform was written as multiple AngularJS apps. Each of these apps and their libraries were held in individual git repositories and published as npm packages. All of these dependencies were automatically pulled in through package management and wired up for the module bundler/loader to create the app “platform”. 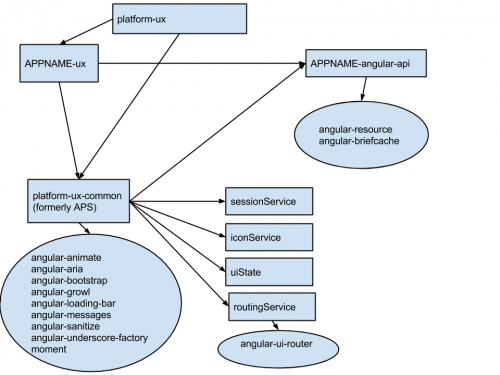 This setup has a some significant disadvantages:

Our goals were to reorganize the code to remove this friction:

Before moving our code, we had to consider the trade-offs of a monorepo, possible tools to manage it, and how our workflow would change.

We used git submodules a bit in the past, but they are cumbersome to work with, and submodules are mainly for including code from repositories that must be separated. We also looked at management tools such as Lerna and Copybara, but they didn’t really fit our needs and were rather fiddly.

Npm, and package managers/registries in general, provide a great way to share and reuse modules. However, many of Banno’s libraries are private to its platform. A single repository removes the need to publish npm modules, and the resulting “dependency hell”. Instead, the module is required/imported using its local file name. Modules can still be published to an npm registry from the monorepo subfolder, but in general modules that are used outside the platform — especially open source — will remain as separate repositories.

The Banno platform ended up as a single git repository with subfolders for our apps, UI components, and libraries. The main benefit of this approach — consolidation — is also its biggest drawback. Repositories in GitHub are not designed for multiple projects, so filtering and watching issues/labels/milestones becomes trickier. Subscribing to a monorepo’s issues means subscribing to all subprojects, even if you’re only working on one. Combining multiple projects into a single repository also means the git history becomes busier. In the end, we decided this was an appropriate trade-off.

Once you have the goal to move to a monorepo, how do you migrate your existing codebase? Here are the steps we took.