Microsoft’s Internet Explorer (IE) has led the web browser market for about a decade now. It’s easy to see why: It won the browser war against Netscape in the 90’s and was basically unchallenged until mid-2002. It also comes with every Windows computer, so it’s extremely convenient.

Unfortunately, until this new competition arrived, IE largely stagnated. It wasn’t until 2006 — five years later — that Microsoft released the next version: Internet Explorer 7.

But now, more than two years after the wide release of IE7 and after the release of IE8 (March 2009), IE6 is still showing strong usage across the web — as much as 20% of visitors in some cases. Why is that? 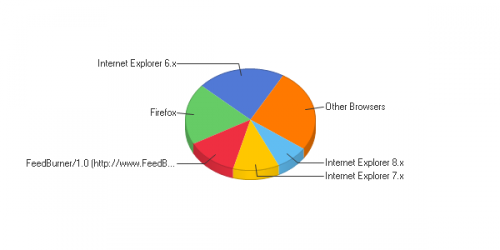 Why Won’t It Die

Many users, and even IT departments, may have the “If it ain’t broke, don’t fix it” mentality. If IE6 appears to be sufficient, there won’t be much of a push for an upgrade.

Company-wide upgrades cost time and money. The downturn in the economy has already reduced corporate spending on new technology. A lot of companies are holding off on upgrading to Vista, sitting on their Windows XP+IE6 computers.

End-users are afraid of change, often irrationally. They are usually ignorant of the problems with IE6 and the available alternatives.

Amazingly, a lot of web applications, some of them by major vendors, still require IE6 and are incompatible with modern browsers! By forcing their customers to use outdated technology, they stifle other vendors from improving their own software.

The Problems With IE6

IE6 was introduced eight years ago, and is long past its due date. It wasn’t even state-of-the-art when it was new. Many modern websites will look bad or broken.

IE6 also has stability issues, exhibiting errors and crashing frequently. Features that are common nowadays (such as tabbed browsing) don’t exist in IE6.

Most importantly, IE6 is built on old technology that contains bugs and security holes. Microsoft stopped providing updates for IE6 in 2006, so the 21 unpatched issues in IE6 are going to stay there.

Web developers are particularly eager for IE6 to disappear. Because IE6 has incomplete or broken support for most of today’s standards, often special coding must be added for a website to look good in IE6.

Many developers have already dropped support for IE6, and now big sites are following suit. YouTube, owned by Google, has already announced that it phasing out support for IE6. I would expect other Google properties (such as Gmail and Google Docs) to begin putting pressure on IE6 too, especially since Google is now directly competing with Microsoft in the browser market.

It’s a catch-22. Web developers can’t forget about IE6 as long as people are using it. IT departments don’t want to upgrade their entire company unless websites stop supporting IE6.

Luckily, change is inevitable. Eventually computers will have to be upgraded with modern software. Microsoft will discourage companies from using it, and their competitors will pressure everyone to move away from IE. Websites will slowly stop supporting IE6, and users will complain to their IT departments when they can’t use the sites. The change may be slower than most of us would like, but it will happen.

The best thing to do is to bite the bullet and include these software upgrades in your annual technology budget. End-user concerns can be overcome with advance warning and training. If your company is using a vendor that requires IE6, then switch to a leading competitor.

Within the last six months, many grassroots campaigns have been started (mainly by web developers) to convince both home users and enterprises to upgrade their browsers. You can visit their websites for more information. Here are just a few:

One Response to Die IE6 Die