Creating a Progress Bar with CSS

This week at Goodsmiths we launched our redesigned checkout process. 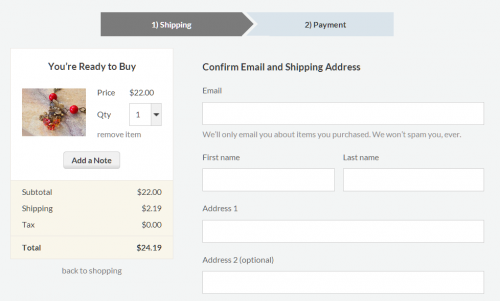 First step in the checkout process.

Because the progress bar (across the top) was one of the more interesting pieces to create, I thought I’d walk through the CSS used to construct it.

First, here’s a look at the design mockups for the intended appearance:

As always, the goal is to have semantic HTML without too much extra markup. A progress bar is an ordered sequence, so let’s start with HTML’s ordered list element:

Note that I did not include the step number in the LI contents — it is expressed semantically through the list structure.

I’ve also added some CSS classes for future styling. Of course, you could use different CSS selectors instead of classes, but I think they are useful here.

First, let’s turn this into a horizontal list using the standard CSS declarations. I will be writing the code in SCSS, because it is so much better than vanilla CSS.

(We’ll be needing the $padding value for other calculations soon.)

Let’s also add some basic formatting of the text and colors:

Finally, let’s include the numbering on the items using the :before pseudo-element and CSS counters. I’m going to add a <span> tag around the list contents and apply the number to that. (I’ll explain why in a moment.)

Okay, that was the easy part. There shouldn’t be any surprises here if you work with CSS regularly.

Now let’s add the chevrons (arrows) to the list items. There’s a well-known trick for creating triangles in CSS. For those who don’t know, CSS allows you to set a different color for the border on each side of a box element. Here’s a square element with wide borders:

Notice the diagonal lines at the corners? Here’s what happens when you make the box zero pixels in size and increase the border width:

Now, let’s make all but one side transparent:

Neat, huh? Because the effect requires the element to be zero width/height, it has to be used on a throwaway element, or more commonly, a pseudo-element like :after. You can use a generator like cssarrowplease.com to do this for you.

Okay, now let’s append some arrows to our list items.

Creating a cutout is the same as creating a triangle — just invert the transparency:

Now if we prepend a triangle cutout to the front of each item:

Finally, we don’t want arrows at the beginning or end of our list, so let’s remove those:

Voilà! Note that IE8 doesn’t support :last-child, so you’ll need a polyfill or different selector to support that version.

From here you can give the list items equal widths, and center the whole thing on the page.

Comments? Do you know a better way or have improvements?

11 Responses to Creating a Progress Bar with CSS