An Intro to Software Copyright

Copyright is a set of rights, granted under law, to authors when they create original work. In the United States, software falls under copyright law, just like books and music and other creative works. This means that all the stuff you use on a day-to-day basis — Microsoft Windows or Mac OS, your email program, your word processor — is protected under copyright law.

The companies that own the copyright have the exclusive right to copy, distribute, and adapt the software. This means that, by default, you are not allowed to:

Because copyright law is exactly that — law — you should take care to follow it. Ignorance or accidents are not an excuse — with minimum penalties of tens of thousands of dollars, you don’t want to be caught on the wrong side of the law.

First, be aware that when you buy boxed software from a store, or buy a Windows or Mac computer, you don’t actually own the software. What companies typically do is license a copy of the software. This is typically done through a long, unreadable “end-user license agreement” (EULA) that you see when you install the software. A EULA is actually a contract between you and the manufacturer that details what you can and cannot do with the software. Most software EULAs share a common set of legal language, but there’s nothing to stop a company from including bad (or good) terms. 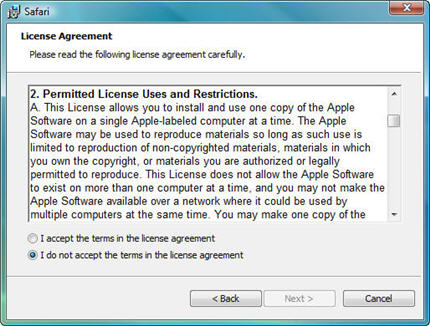 Let’s take a closer look at the three points I mentioned above.

One restriction is that you’re not allowed to modify the software. Usually this isn’t something you need to worry about, since software typically comes in “binary” form, meaning that only computers can read them. Unless you are a programmer or hacker who likes to reverse-engineer software, you probably won’t care to mess around with the program itself. There may be other related files that are installed with the program, such as text or pictures, that you can read or interpret. These may be considered part of the software, or they may be independent resources protected under their own copyright — regardless, you are generally not permitted to modify them.

Another restriction is that you are not allowed to make copies of the software. If you copy software onto a DVD for your friend, or install it on more computers than you have licenses for, then you are basically breaking the law. Making these unauthorized copies of software is called “piracy”, and costs software companies billions of dollars a year. (Note that EULAs typically allow you to make backup copies of the software.)

Finally, you are not allowed to give or sell the software — that is, distribute it. Because software is licensed instead of sold, this usually means you cannot give the software to someone even if you are not using it anymore. In reality, this is not often enforced, and it has been overturned by the courts in the past. Just be sure to not make the software on your computer available for download, and don’t download cracked/warez versions of the software.

There exists a legal principle called “fair use”, which allows copying under some instances. Unfortunately, fair use is not well-defined. Generally, you’ll want to play it safe and follow the EULA as closely as possible. Companies are not likely to enforce an infraction unless it is a gross violation or is easy to discover.

You want to be sure that all your programs have been obtained legally and have been licensed. I recommend tracking all the software you have purchased. Keeping the boxes and jewel cases they came in is the easiest method. If you don’t have the space, all you really need are:

You’ll also want to write down where the software is installed — which computer is using it, or if it’s available to be installed. For large enterprises, there are sophisticated tools and techniques. For smaller companies, all you really need is a spreadsheet.

Disclaimer: Copyright, like all laws, is subject to interpretation. I am not a lawyer and this is not legal advice. Consult a lawyer for your particular situation.